Felicia Feaster for the AJC | February 2016

In his latest show at a temporary pop-up art gallery on the second floor of the buzzing Ponce City Market, Turk has installed his latest works with an odd “hook.” The hook? Spent and burst bicycle tires that have seen better days and are donated to the artist by an Atlanta bike shop. 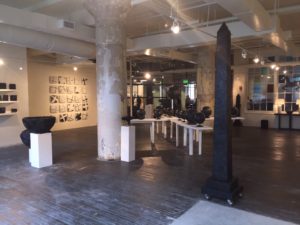 Their appearance straddles the future and past, suggesting a physical world cobbled together with industrial parts. Both the objects and their presentation make a certain kind of sense in this former Sears, Roebuck & Co. building-turned-mixed-use mini-city, which is its own upcycling of old industry into new. Turk says he intended his show to look like a luxury goods store, with objects arranged to catch the consumer’s eye.

In that sense, “Torque by Turk” is a bit of an everything show: Lamps and furniture that could be in the window of a contemporary design shop rub up against oddball sculptures whose lack of use-value telegraphs their status as conceptual art (or, if you buy into Turk’s premise, useless, decorative baubles in a high-end shop). But beyond that tongue-in-cheek spin of junk turned into high-priced treasure, “Torque by Turk” feels a bit like a case of throwing everything into the mix in the hopes of appealing to a broader audience.

His invocation of luxury shopping makes a certain sense in a setting like Ponce City Market, though the metaphor turns back upon itself when you consider the shared strategy of an art gallery, which to most people also deals in very expensive objects aimed at a well-heeled crowd.

Some of the strongest works in the show are Turk’s “Bound Globes,” many of which strategically place the bicycle tire’s valve stems to illustrate themes like “Major Cities,” “Tallest Buildings” and “Dangerous Airports.” Those works continue the artist’s fascination with mapping and geography. By rendering a familiar global topography strange, he gives a sense of apprehension and threat to the warm fuzzy notion of one “global” planet. On their own, those symbolic globes could have made for a fascinating idea, but mixed in with so much other stuff, their impact tends to be diluted when so many other objects are simply “wrapped.”

Turk’s technique is interesting, but there’s not a strong enough overriding idea or agenda to support these disparate pieces. It’s a scaffold without a finished building.

The temporary gallery space Turk uses for his show is in limbo, before being turned into a retail shop. But it happens to make a great gallery, ensconced in the bustling, scene-y Ponce City Market. There have been other temporary blink-and-you’ll-miss-them art shows in this upcycled, repurposed building. But it would be nice to see an actual gallery pop up and stay in this temple to food and retail, whose captive, eager and exploratory audience could probably benefit from a little culture served up with the great food and shopping opportunities. 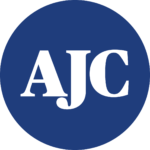