I am a topophiliac.  My affection for place and all things geographic is manifested through various sculpture series, public art installations, photography, and works on paper.  The appeal is not the actual geographic information as much as what that information tells us about ourselves as individuals and as a culture. Through my art, I tend to focus on the fundamental qualities of mapping— the mysteriousness, inherent biases, cultural authoritativeness, and ability to simultaneously represent and distort reality. 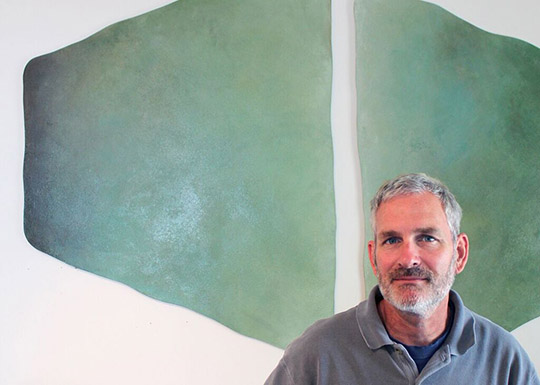 Known for his public art installations, ceramic sculpture, photography, and mixed-media constructions, Gregor Turk often incorporates mapping imagery and cultural markings into his artwork. His response to his surroundings, whether in his hometown, Atlanta, or while traveling, serves as a major impetus for much of what he creates. Projects include producing a significant body of artwork resulting from hiking and biking along the course of the 1,270 mile section of the 49th parallel that defines the U.S./Canadian border, photographing blank billboards along fictitious Interstate 50, and making thousands of rubbings from text and imagery from the ubiquitous historical plaques and markers found in American cities.

He has permanent public art installations in the International Concourse at the Atlanta Airport (gates E 33 – 36) and in the Jacksonville Airport.  His work is included in the JPMorgan Chase Art Collection, High Museum of Art, MOCA – GA  (Museum of Contemporary Art – Georgia), and numerous other public and private collections. He received his B.A. from Rhodes College and his M.F.A. from Boston University.  Between degrees he served as a Peace Corps Volunteer in Liberia, West Africa.  His studio is located in Atlanta, Georgia.

Crossing the Line: Cleopas R. Johnson Park, City of Atlanta, Atlanta, Ga. 2011
Design of plaza pavers referencing Johnson as a band leader and his ability to cross the color line.

Apparitions: Atlanta, Ga. Fall, 2013 – Fall 2014
Five inwardly facing billboards constructed along a pedestrian corridor with 3 different sets of images that change over the course of installation. Funded by Atlanta Celebrates Photography and Art on the BeltLine.

Atlantais Archipelago: Atlanta, Ga., various locations throughout the city, 2010
An installation of aerial imagery of Atlanta reconfigured as imaginary islands output on durable vinyl adhered to sidewalks. Funded by the City of Atlanta’s Office of Cultural Affairs.

Binary Chair: Chairs, Emory University, Atlanta, Ga., 2003
A two-part ceramic chair (a steel armature lifts and supports the back of the chair), part of an temporary outdoor public art installation located throughout the grounds of the university campus.

Homer Town Marker: Homer, Ga., 1991 – 1992
A collaborative project in which over 100 members of a rural community took part.  The project was funded through a New Forms Regional Initiative Grant (N.E.A. and the Rockefeller Foundation), approved by the town council, and installed in the town square.

Teaching Artist: Georgia Council for the Arts/Young Audiences/Arts for Learning: 1989 – 2015

The 49th Parallel: Barrier as Corridor