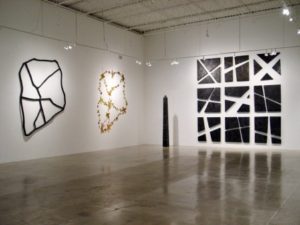 Gregor Turk has devoted a large share of his career to exploring the map, well, every which way.

In work encompassing clay sculpture, conceptual photographs and actual travel (he bicycled and walked the length of the U.S.-Canadian border in his “49th Parallel Project”), Turk has considered the map as a tool, a cultural construct, a fiction. He has exploited its aesthetic qualities and deconstructed its language.

The Atlanta artist brings together many of his concerns and methods in “Terminal Velocity,” his engaging solo show at the Museum of Contemporary Art of Georgia. The culmination of his year-long Working Artist Project grant, it runs through July 14.

The self-described topophiliac aims to make art that is “a point of departure.” Three giant versions of the familiar map of metro Atlanta’s Interstate highways announce that our city and its car culture are the jumping-off point.

“Metronesian Stick Chart” exemplifies the material and the wit that dominate the show. The highways are wrapped in black inner-tube rubber, their exits indicated by tire valves.

The roads in “Metronesian Tectonics” are composed of actual car nameplates. Turk has arranged them in clusters of similar character — cowboy ruggedness (e.g., Sierra), European glamour (e.g., Riviera), animal magnetism (e.g., Jaguar) — to highlight the Madison Avenue metaphors and our relationship to cars as extensions of our (aspirational) selves.

Maps are, of course, abstractions of geography. “Interchange,” a series of six square, wrapped-rubber wall pieces based on actual Atlanta intersections, takes that notion even further: geography as abstract art. Although it is striking, the piece is not as resonant as others here.

“Fetish Series,” a group of 15 X-shaped sculptures, is more interesting as a point of departure. Each piece is made of branches Turk has gathered from the Atlanta neighborhood named in its title. As in “Interchange,” he nullifies the specificity, this time by wrapping all but one in black rubber. X is supposed to mark the spot, but these X’es have no context or character: an ironic place for a topophiliac to find himself, but that ambiguity is his point.

Turk employs a variety of wrapping patterns and embellishments that inflect the reading of the X shape. The pieces impaled with flurries of nails, for instance, are reminiscent of religious objects in Africa, where he spent two years in the Peace Corps.

The ruffly version suggests a kiss on a valentine, a sweetness that contrasts with the generally more sinister aura. Nancy Grossman’s leather-covered sculptures come to mind, and, given the phallic shapes of the wood, Robert Mapplethorpe and his bondage photographs.

The phallic references become, shall we say, more prominent in the “Monument Series.” Turk has made four rubber-wrapped obelisks, which mark the corners of the gallery. One is titled “The Aggrandizer,” a pointed reference to the ego behind the will to mark the land. But the poor thing shrivels into a flaccid state unless a visitor is willing to use the attached tire pump to blow it up.

“The Courier” resembles a suitcase, and another is on wheels. This of course mocks the notion of the monument as a permanent marker. And Turk makes good on their portability. Employing a trope used by a number of contemporary artists, he has transported the monuments around town and recorded their travels in photographs compiled in the book at the front desk.

These playful pictures treat the obelisks as a character. A worm’s-eye views casts one as Big Man on Campus in the similarly phallic atrium of a John Portman hotel. One plays the preservationist, a lone protester in front of a bulldozer. There’s brotherly love as well: a Turk obelisk standing close to a just-as-silly undersize one on Peachtree Street near Brookwood Station.

Turk’s monuments are a humorous version of “Ozymandias.” They also refer to our culture of mobility or, to bring up an idea with local currency, noplaceness. If change is the new stability, then “Terminal Velocity” is not an oxymoron.